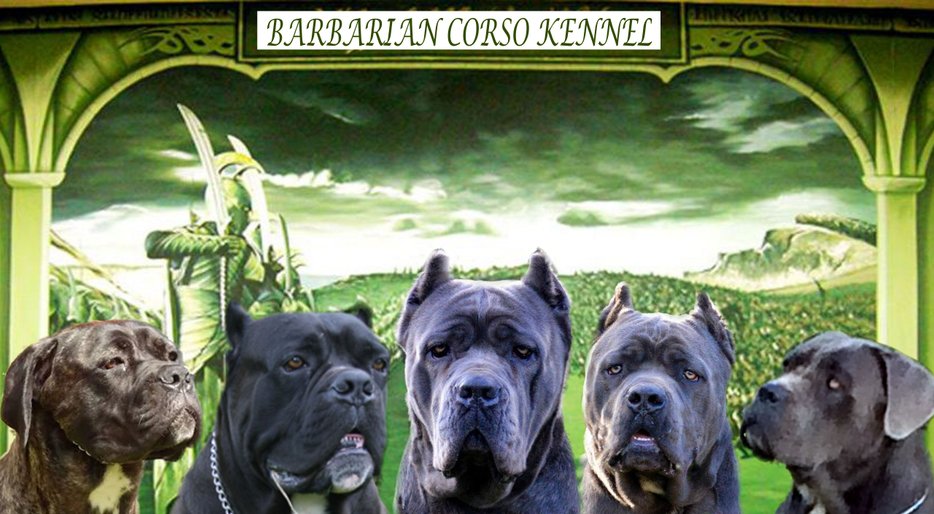 HISTORY OF THE CANE CORSO

Special thanks to the author

The story of the Cane Corso, coincides extraordinarily with the history of the Italic people, in all the splendor and their misery. Unfortunately this breed, saved in the last few years from what seemed an inexorable and fatal decline, reaches us with a scanty but still significant historical and iconographic background from which a few enthusiasts have tried to reconstruct the origins of this breed. The etymology of the name Corso is still uncertain. The most credible hypothesis are those which indicate Greek origins: KORTOS = wall and from the Latin: COHORS = guard of the courtyard. Until recently the oldest documentation citing the name of the Cane Corso, consisted of a few poems and some prose dating from 1500. In 1998 the A.I.C.C. or Associazione Italiana Cane Corso published a study on the breed which brought to light the military use of the Cane Corso, in 1137 in Monopoli di Sabina (near Rome) , the finding of kennels from the period and the close links between the race and Roman history. All of this allows us to consider the Cane Corso, as the principal evidence of an ancestral race which has maintained particular characteristics over the centuries, which take us back in time, not just to the period tied to agricultural economy immediately prior to the industrial revolution, but even further back linking dog fanciers with the great civilizations of the past; the rise and fall of the Roman empire, the middle ages and modern times. The Cane Corso, has maintained through natural selection over the centuries, the closest possible contact with environment and the roles which man has asked this precious companion to play. We are talking about hard times when the success and survival of a  breed depended exclusively on their ability to render work, so the choice of raising and keeping a dog was a purely economic one. A responsibility taken which had to correspond to the acquisition of a good or service, nothing superfluous was allowed. The Cane Corso, which we can admire today is the best evidence of the theory which sustains that when a race exhibits certain morphological and behavioral characteristics relating to the work it is required to do, then that race shows harmony of form and balanced character. The past of the Cane Corso, is not only largely present and alive but also extraordinarily current, as if time had just slipped away. The Corso has conserved from its ancestors the Molossi of Epiro and the pugnaces of Rome, used in war and for fighting in the circus, the aggressive and combative nature necessary for successfully reaching its goal, with no hesitation and with surprising potential force. Through contact with man in social situations he has learned to react only when necessary, becoming an excellent interpreter of human gestures. With these characteristics the Cane Corso, has survived until today. In small settlements in the south of Italy where they have maintained an archaic system of agriculture and a multi purpose dog is an essential partner.

The modernization of agriculture and systems of breeding, in particular the disappearance of breeding in the wild and semi-wild state. The disappearance of wild game and the use of firearms with the consequently different techniques of hunting have reduced the traditional uses of the Cane Corso. It is for this reason that the diffusion of the Corso has suffered drastic reduction since the Second World War. The situation at the beginning of the 1970s was worrying for the very survival of the race, then reduced to a modest number of examples and no longer considered by in official dog-fancying circles despite the efforts of individuals like the Count Bonatti and Professor Ballotta. It was in the 1976 that an enthusiastic dog lover and researcher of the rural traditions of Italy, Doctor Breber, brought the Cane Corso, to the attention of the public and official dog fancying circles in an article published in a number of the ENCI (Italian Kennel Club) magazine. He followed this first step with the setting up of a rescue mission carried out by a group of enthusiasts who had made contact with Dr. Breber in the meantime. In October of 1983 these enthusiasts formed the S.A.C.C. (Società Amatori Cane Corso). The common intentions of rescuing the race were the basis for the forming of the SACC, which suffered its first shock in 1986 when Dr. Breber abandoned the society. This fact has little resonance at the time as the group was not well known and lived on the edges of dog-fancying officialdom. This was a determining factor in the future direction of the race as was the contribution of the man who was among the first to contribute to the new interest in the race and who provided the dogs for the first litter: Basir the model for the standard of the race was the son of Dauno and Tipsi, two dogs chosen by Dr. Breber. When Dr. Breber left the SACC centered itself around the kennels in Mantova run by Giancarlo Malavasi with the entire breeding program of the race and the running of the SACC in the hands of Stefano Gandolfi, Gianantonio Sereni and Ferdinando Casolino. The need to move the breeding program forward at all costs become the justification for centralized running of the association which was not very democratic and often object of not positive chattering. For these reasons the SACC, two vice-presidents from different times stand out, Mr. Oreste Savoia and Dr. Flavio Bruno. In this period it must be highlighted that the activities of the SACC for the recognition of the Cane Corso were carried out with energy and appreciable results. Unfortunately the same cannot be said from the dog fanciers point of view because the level of quality of the litter thrown by Basir in 1980 were never repeated and the subjects produced, appeared and today still appear distant from the desired model and show considerable variation. In that period the SACC successfully organized dog fanciers meetings with the scope of making the race known and allow the judges of the ENCI to carry out tests and measurements.

This activity produced an official standard document edited by Dr. Antonio Morsiani ratified by the judging committee of the ENCI in 1987. In the same edition of the standard, perhaps because of the need to differentiate the Cane Corso as much as possible from the other Italian Molosso hounds, the Neapolitan Mastiff, for the purposes of recognition, some inaccuracies were allowed which led to considerable discussion. The most important regards the closure of the teeth in that the standard requires a slight prognathism. The level bite is only tolerated, however being just as common in the Corso. This is shown not only in the many positions taken by enthusiastic breeders (including Breber) but also in the official records of the first convention, Convegno nazionale di Civitella Affadena, June 16th 1990. In 1992 in order to better follow the evolution of the Race the ENCI decided to record the births of Corsi born of parents verified by the judges and as such considered heads of blood lines, in an unofficial book called the Libro Apperto or open book. The data contained in this book was transferred into the official books when the race was officially recognized on January 20th 1994. The enthusiasm for this race, the curiosity and the knowledge that a greater number of dogs and a greater interest in the race would have helped in the push for recognition, lead to an uncontrolled increase in the production of litters with a consequent reduction in the average quality of the offspring. In this phase the SACC, not only omitted take any action to inhibit this phenomenon, but rather took every opportunity to publicize the race and themselves as its saviors. Under this pressure the number of Corsi produced jumped from a few tens of animals at the beginning to the current 2500 annual registrations. Given the lack of improvement in the quality of the animals produced the success of the race was vaunted in terms of numerical increase. This choice penalizing the zootecnical aspects paid of in terms of political ratification. On May 22nd 1996 at Arese the best Cane Corso were gathered. CH Boris was used as the model for the presentation of the characteristics of the race at the upper levels of the F.C.I. A few months later in November 1996 the Cane Corso was recognized at an international level. This seemed a positive result but it lead to further worsening of the system because many enthusiast from outside of Italy, inspired by the novelty of the situation bought the Corso without due care or consideration. Often their chose was based on lack of information, ready availability, colour or the price of the puppies. What has been revealed in the last few years is the total lack of a serious information service and management of the race at an international level. In the general confusion, those few who have tried to organize the Cane Corso enthusiasts in their own country have found difficulty in opening communication with the SACC which has often hid its obvious shortcomings behind a veneer of arrogance.

In July of 1999, after years of superficial management and repeated appeals against the controlling bodies the Enci finally relieved the SACC of recognition as the official club for the race of the Cane Corso». In an attempt to obviate the situation some enthusiasts have founded the A.I.C.C.

If the second millenium closes under a cloud of uncertainty for the Cane Corso, the third millenium opens with a great hope; the presidents of several national associations, Mr. Renzo Carosio for the Italian AICC, Mr. Micheal Ertaskiran for the American ICCF and Mr. Erik de Vries for the Dutch CCNL have decide to work together towards an international coordination of the race based on the commitment of serious dog lovers.